Despite a recent reversal by Google on its decision to retroactively ban adult content on Blogger, my blog will continue to reside at https://poultryreport.wordpress.com. Thank you for visiting here and your patience with the move to The Poultry Report's new home.
Posted by Uccie Poultry at 9:32 AM No comments:

The Poultry Report can now be found at https://poultryreport.wordpress.com 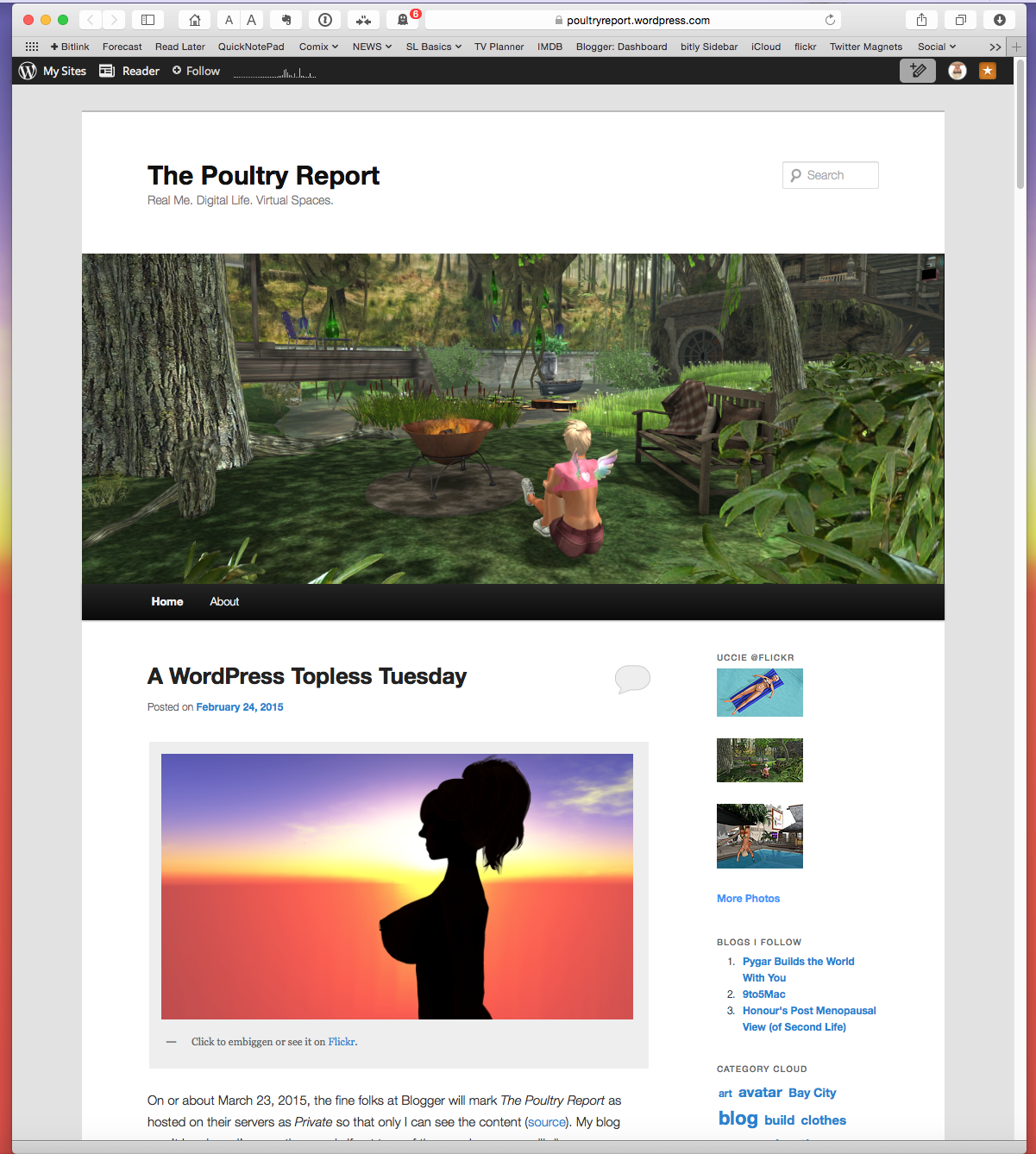 Posted by Uccie Poultry at 11:21 AM No comments:

On or about March 23, 2015, the fine folks at Blogger will mark The Poultry Report as hosted on their servers as Private so that only I can see the content (source). My blog won't be alone. I'm sure thousands if not tens of thousands or more will disappear because someone has an issue with nudity and other adult topics. So much for free speech.

So here is the last Topless Tuesday picture I will post on Blogger. Going forward, my blog will be hosted by Wordpress at https://poultryreport.wordpress.com

The move is in progress so the look of the new site might change. I'm still using the same template that I picked when I created the Wordpress version years ago when I experimented with it versus Blogger.

Perhaps it is easier to objectify bare chests on women than it is on men and likely this will always be so. It is an erogenous zone, after all. And as much as I decry the inequality between men and women on this issue, I often look at other women with a bit of lascivious glee, clothed or not. I like boobs but I can understand some of the reasoning behind Blogger's policy change.

I can't help wonder, though, if Google/Blogger will crack down on violent images. Which is more harmful ... a picture of a woman's breast being caressed or one being carved at with a knife? Frequent exposure to anything will desensitize a person to the stimulus it provides. That's one of the reasons the Romans held The Games. Let Citizens see violence and they will become accustomed to it. Frankly, I'd rather see more breasts and hope I don't get bored.

Since my efforts with The Poultry Report have to been focus on Second Life I'll abstain from delving into the nanny state concept behind all of this. Perhaps I'll tackle it in the future if I can find an SL tie-in.

Due to Blogger's new content policy I'll probably be moving my blog to another service. It is either that or remove all nudity from my posts, even the posts decrying the double standards for women and men when it comes to nudity. Right now I'm comparing services and prices and I'll post something here about where you can find my blog starting March 1st.
Posted by Uccie Poultry at 9:56 PM 1 comment:

Once in a while my wife asks me to wear something special for her. This is what she picked.

This is for you, Catnip!
Posted by Uccie Poultry at 8:18 AM No comments: