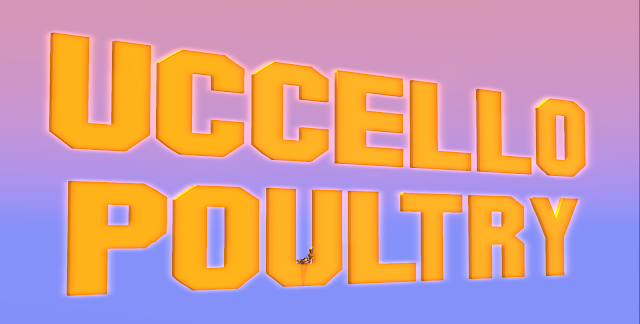 Strawberry Singh is back with another meme this week: SL Names. I find this challenge interesting because of the on-going push by residents to bring back surnames and the battles I've had with my own name.

What made you choose this name? When I came from the Teen Grid I gave up that avatar and thought that I could get the same surname as my brother, CC Columbo, but it wasn't available. My next goal was to be funny and Poultry fit the bill (pun intended) out of the otherwise lame set of choices. I thought about using my Real Life given name, Caitlin, but decided to extend the humor and looked up "Bird" in several languages. The Italian "Uccello" was the prettiest and I remembered from Art History that there was a famous painter by that name, so I went with it. So I'm Bird Bird, if you think about it hard enough. I have an alt that uses the Bird Bird scheme, too, and I locked up Uccello Resident when surnames were dropped.

What’s your SL nickname, or what do most people call you? (if applicable) Most folks call me Uccie or whatever happens to be in my Display Name at the time. I've been called Cell and several unprintable things. My wife calls me Kitten and Pet.

What’s your SL display name? Why do you choose to have one? (if applicable) Right now my Display name is Uccie Poultry-Seale. My wife has Angela Seale-Poultry set as hers. See? Cute married couple stuff.  Don't ya hate cutie couples? For special occasions I'll change so on St. Patrick's Day I sometimes go by Caitlin O'Mgosh or Caitlin O'Really or something-else hopefully amusing. Halloween, Christmas, and other holidays see some fun, too.

Do you like your SL name? If you could change your SL name, what would it be? Oh, would I ever like to change my name. I've asked often and vociferously, even offering to pay a fee. As 99% of Italian residents point out to me –– even when I beg them not to do so –– uccello is an uncouth slang term despite what all the dictionaries read and 99% of the Italian residents don't have the decency to just shut up about it. Otherwise they are lovely people and the language is beautiful, but get out of the gutter sometimes, huh?

Anyway, I envy the names that some of my alts have ... Zyx or Xandah or even Caitlin. I'd still like the surname Columbo. Right now my brother uses the Display Name CC Poultry so we can be family. I also envy the names of a couple of his alts.

Notice how most require a surname to work. Very few "Resident" names are that clever, really. I mean, anyone can write something funny, but it takes brains to look at a selection of surnames and be witty. Many of the Linden Department of Public Works (LDPW) Moles are very, very witty. Check out some of the Past and Present Moles of the LDPW here.

Got some comments? I'd love to see them.
Posted by Uccie Poultry at 3:02 PM

I laughed that you had a whole list of names, that's pretty amazing that you've been collecting the all these years. My fav was thisnamewassurprisinglynottaken Resident, I just burst out laughing because really, that is just genius! LOL Also, I know Accountant Adzebills, she's a sweetheart and I always giggle at her name, she goes by Adzy though because she's kind of embarrassed of her name which makes it even cuter. Thanks for sharing! <3

@Strawberry : Adzy's name is great! I gotta add that o my list. Thanks!